It is with great joy that I share with others this photograph of the Kente cloth my father, A.E. Asare, wove for the United Nations. The name of this piece is “Tikoronkoagyina,” which roughly translates into English as, “One head does not go into council. Two heads are better than one.”

I barely even knew my father, as he died when I was 2 years old – but I was destined to follow in his footsteps. At a very young age I was drawn – with a wonderful intensity – to explore the world of Kente weaving and to make my own designs and patterns. By the time I was a teenager I began to take extra initiative with around the Dento Mills looms and when I wasn’t in school or doing homework – I was spending lots of time at Dento Mills seeing what I could create.

My father was very active in the late 50s and early 60s in bringing Kente cloth to forefront of the all-important African Independence Movement, particularly through his association with Kwame Nkrumah, the first and most well-known of the great African anti-colonial independence leaders. Every time Dr. Nkrumah had an important event or ceremonial function, he always asked my father to create a cloth especially for that event. Whenever you see a photograph of Dr. Nkrumah in a kente cloth, you are seeing the work of my father and their spiritual relationship. Through Kwame Nkrumah my father was commissioned to create a special Kente cloth for the United Nations itself, which is displayed in the above photograph.

7th March 1957: Ghanian Prime Minister Kwame Nkrumah (1909 – 1972) arrives at the Assembly House in Accra for the opening of the new Parliament and the declaration of Ghana’s Independence by the Duchess of Kent. (Photo by Central Press/Getty Images)

Of course, I was deeply honored when the United Nations asked me to follow in my father’s tradition and I was commissioned to create a new Kente cloth to replace the one done by my father, which was beginning to wear and unravel from age. The Kente cloth I created is titled, “Consensus has been Reached.” It represents the ideal of harmony, creativity and integral unity of Kente weaving as a symbol of the highest ideals of the mission of international diplomacy. As I created the Kente cloth, it was my hope and belief that our international leaders should work toward the ideal of reaching or achieving some kind of union and consensus. 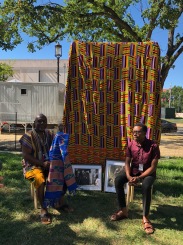 My son Kofi and I in an interview at the Folk Life Festival at the National Museum of Art.

Kofi at the large Kente loom. 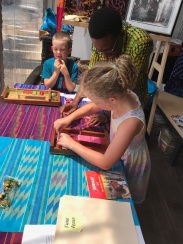 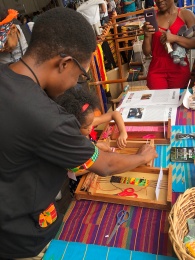 Some scenes from my son Kofi Asare’s recent visit to Washington, D.C.

It has also been a great joy to have my son, Kofi Asare, visiting me here in Washington, D.C. in recent months, and for me to travel back to Ghana with him and spend some time at our family Kente weaving mills. Just as I followed in my father’s footsteps, it is clear to me that Kofi is destined to follow in my path as well. While Kofi is studying actuarial science at Kwame Nkrumah University of Science and Technology in Ghana, he is also spending a great deal of time tending the Kente looms at Dento Mills. Perhaps some time in the distant future, Kofi will also create his own Kente cloth masterpiece for the United Nations, as well, and our father-son tradition will continue.

African Beauty – Music for the mind, heart and soul, from the Motherland